Shiprock is an iconic stone sentinel, rising 1583 feet above the stark plains of northwestern New Mexico. The National Park Service designated Shiprock as a National Natural Landmark in 1975. Visible from 50 miles away on a clear day, Shiprock is the throat of an ancient volcano, with a peak 7,178-feet above sea level. In the 1860s, Captain J.F. McComb tried to name the volcanic bohemoth “The Needles”; however, that name didn’t catch on. By the 1870s, Ship Rock was used on U.S. Geological surveys, named based on the formation’s resemblance to a 19th-century clipper ship.

Located about 14 miles from the town of Shiprock, New Mexico and 10 miles from the Arizona border, Shiprock is part of the Chuska volcanic field, which is a result of the tectonic force of the Colorado Plateau. The field encompasses the eroded remains of volcanoes that erupted around 25-30 million years ago. Though Shiprock is the most striking rock formation, there are a variety of interesting volcanic features scattered between Gallup, Window Rock, and Farmington, like small intrusions, dikes, and extrusive igneous rock.

For those of you who didn’t take geology, extrusions occur when magma reaches the surface, like the El Malpais lava flows around Grants. Intrusions occur when magma cools and solidifies underground, with three common types of intrusions: batholiths, sills, and dikes. Batholiths forms when magma rises in a pool under the earth’s crust, but it cools underground rather than breaching the surface. Sills form when magma fills in horizontal fissures. Dikes form when magma fills in vertical cracks or tension fractures during volcanic eruptions.

The two principal rock types in the Chuska volcanic field are minette and microbreccia. Minette is a rare, potassium-rich type of igneous rock, indicative of magma that originated deep beneath the earth’s crust, from a mantle source that is slightly different in chemical composition from “normal” mantle due to slow, pressurized melting of the mantle. The microbreccia consists of small stone fragments welded together, crosscut by thin veins of lava. 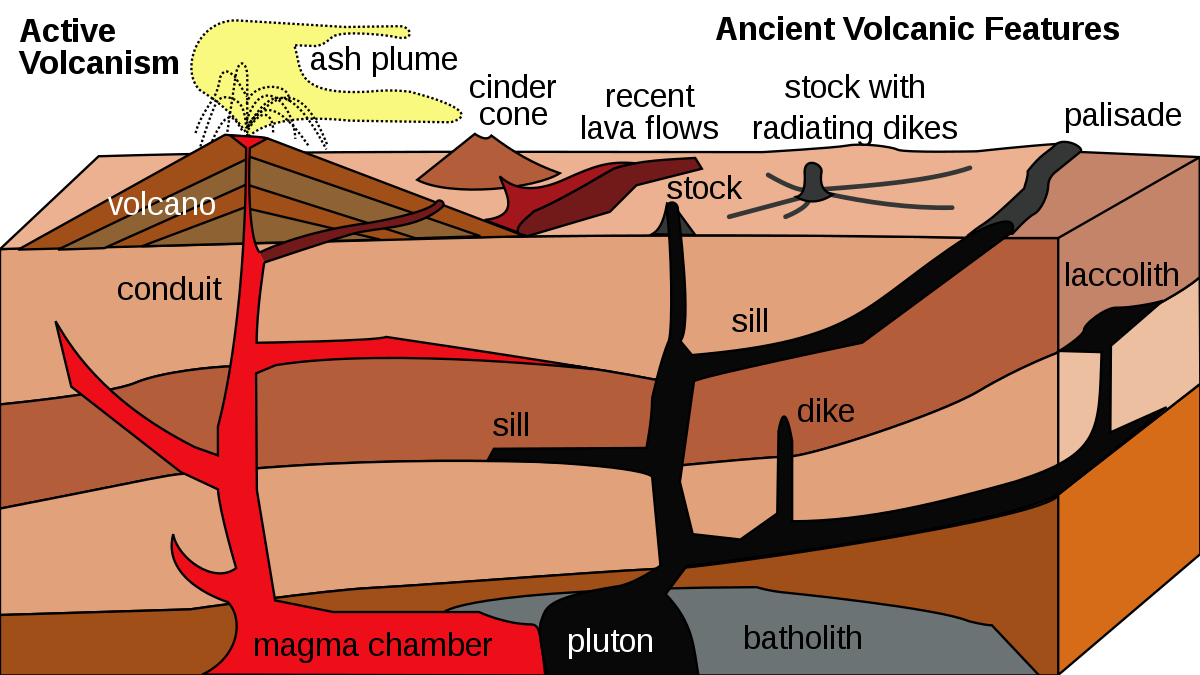 Shiprock is the most well-known volcanic feature in the Chuska volcanic field, more commonly referred to as a volcanic plug. It is the exposed neck or throat of an ancient volcano. Geologists believe the crater of Ship Rock formed about 3,000 feet below the earth’s surface approximately 27 million years ago when lava solidified inside the feeder conduit of a large, ancient volcano. The date is based on radiological testing of the minette to establish when it solidified. What we see today is literally the root system of that volcano, slowly revealed over millions of years as wind and water eroded the softer sandstone, mudstone, and shale surrounding the central vent and vertical dikes.

Additionally, Shiprock is a monadnock, an isolated outcropping of bedrock that rises dramatically from a virtually flat landscape. Monadnocks are erosional remnants, where a mass of stone deposits is harder and more resistant to erosion than the surrounding rock, like igneous rock surrounded by sandstone, mudstone or shale.

The United States Geological Survey deemed Shiprock “one of the best known and most spectacular diatremes in the United States.” A diatreme is a carrot-shaped volcanic vent or pipe that forms explosively when gas-charged magma escapes with enormous velocity. However, the minette magma associated with Shiprock is not rich in dissolved gases so why would the eruption be so violent? The evidence suggests that as the magma seeped into cracks and crevices, the lava interacted with ground water, producing an extremely explosive steam-blast. Volcanologists call these hydrovolcanic eruptions.

The explosion formed a crater at the surface, called a maar, but erosion erased any trace of the crater long ago, leaving nothing but the partially exhumed volcanic plumbing. Based on the depth of the volcano, that means the eruption blasted through most of the sandstone and shale sediment deposited by the Western Interior Seaway.

Beyond Shiprock’s enormity and unusual mineral composition, the distinctive rock walls emanating from the peak provide another aesthetically striking feature. In total, there are seven minette dikes, all of them created as the eruption occurred. Like the throat of the volcano, the dikes formed deep beneath the surface, exposed over time due to erosion. The three main dikes radiate west, northeast, and southeast from the main formation like long tails. The most impressive one is 5 miles long, rising to 150 feet, though only a few feet wide at the top. BIA-13 cuts through the southern end, with a great spot to pull over and take photos. Based on the divergence pattern of the dikes, Geologists believe they merge, with the root zone deeply buried. Eventually erosion will expose that as well.

Shiprock and the Navajo Migration

In the Navajo language, Shiprock is called Tsé Bitʼaʼí, which means “rock with wings” or simply “winged rock.” Though Shiprock resembles a large, sitting bird from certain angles, with the north and south peaks forming the crests of folded wings, the name is based on more than appearance. Shiprock is sacred to the Navajo. It figures prominently in Navajo lore, including playing a pivotal role in the Navajo migration story.

Based on oral history, the ancestral Navajo were under siege by an aggressive tribe. When their medicine men prayed for salvation, the ground beneath them became a huge bird that transported them from the cold lands of the north to their current homeland in the American Southwest. The enormous bird landed at sundown, folding its wings to rest as the Navajo dismounted to explore their new surroundings.

Unfortunately, a couple of dragon-like monsters, with an affinity for consuming humans, built a giant nest on top, trapping the bird. The Navajo sent Monster Slayer (Nayéé’ Neizghání), one of the two Warrior Twins, to combat the dragon creatures in a Godzilla vs. Kong type showdown. Monster Slayer killed both, as one would expect from an entity known as Monster Slayer. Furthermore, he cut off the head of one creature, hurling it as far as he could to the east, where it became Cabezon Peak.

The blood of the monsters cascaded down grooves on the bird to the ground below, leaving black stains and coagulating as it spread to form the distinctive dikes that radiate from Tsé Bitʼaʼí. After the battle, Monster Slayer spared the babies, turning one into an eagle and turning the other into an owl. Sadly, the magnificent bird was critically injured during the battle, so Monster Slayer turned it to stone to remind the Navajo of its sacrifice.

The ancestral Navajo lived on the pinnacle of Tsé Bitʼaʼí, coming down to plant, water, and harvest their fields. One day, while the men were tending crops, there was a storm. Lightning struck Shiprock, destroying the path to the peak. The men at the base had no way to get back to the top and the women and children on top were stranded without food or water. The souls of those who perished are still there, which is another reason the Navajo Nation forbids climbing. They don’t want to disturb the ghosts or chʼį́įdii of those stranded souls.

The Navajo believe that when a person dies, everything that is bad or out of harmony will be left behind as a malicious spirit. Spirits have the power to harm the living. If a Navajo comes into contact with a chindi, they may contract ghost sickness and ceremonies become necessary to restore balance to the living. Therefore, any structure where a person has died must be abandoned.

No Hiking or Climbing on Shiprock

Today, it is illegal to climb the magnificent volcanic monolith; however, that wasn’t always the case. Throughout the early 20th century, people were intrigued by the idea of peak bagging Shiprock. It is a technically difficult climb, with each route becoming more challenging than the last. It was featured in the book Fifty Classic Climbs of North America.

Prior to 1939, the peak was virtually inaccessible, because many of the rock surfaces are crumbling. As a result, it was the first place in American climbing where expansion bolts were used, with the first successful summit achieved in October, 1939. Climbers continued to test their skills for thirty years prior to the Navajo Nation banning all rock climbing on Navajo land in 1970. The decision came in response to a climbing accident that resulted in three injuries. The Nation immediately announced that the climbing ban was “absolute and unconditional.”

Beyond the obvious hazards associated with climbing the peak, the decision to ban climbing was cultural. As mentioned above, areas associated with tragedy and death often become taboo, perceived as haunted, and Shiprock is sacred to the Navajo. They don’t want tourists clambering all over one of their sacred mountains and leaving litter.

From Farmington, NM: It is about 41 miles. Take US 64 west to Shiprock and bear left at the intersection with US 491. Continue 7.1 miles on US 64, 491 and turn right (west) onto the paved Indian Service Route 13. Give yourself about an hour if you are timing the trip for photography and lighting.

From the Four Corners Monument: Takes about 50 minutes. Take US 160 south to the intersection with US 64 in Arizona. Head east into New Mexico and you will see Shiprock south of the interstate.

Bisti Badlands | Maintained by the Bureau of Land Management – located 70 miles southeast of Shiprock, NM. Off world hiking. In 1997, Paul Sealy discovered the remains of “The Bisti Beast” (Bistahiaversor sealey), an early cousin of the infamous Tyrannosaur Rex.

11 Things to See & Do Around Abiquiu

There are many places in New Mexico with landscapes more reminiscent of a Star Wars movie than what most people would expect from the...

R.E. “Griff” Griffith built the El Rancho Hotel on Route 66 in Gallup. He was the brother of legendary movie director D.W. Griffith. In...

The Pueblo Revolt of 1680 was one of the most significant events in New Mexico’s history. The revolt wasn’t successful in terms of permanently...

20 of the Best Restaurants in Albuquerque for Chile